When You Think It, Communicate It!

There are a bunch of requirements our Virtual Mentoring Program participants have to meet before they can graduate; the final exam is the last of them. The exam is rigorous, multi-day, and folks taking it can spend 25+ hours on it. In addition, because it’s done virtually, this exam has very strict guidelines for how it has to be turned in, when, and what happens if it’s late. I always proctor the exam and they are given a phone number to use to communicate with me if they have questions or challenges.

I can’t tell you how many times in the past people have had problems and haven’t communicated them until it’s too late to really do so. But that’s all part of the exam, you know? 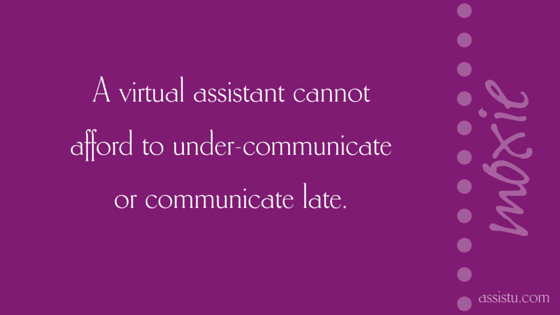 During one exam period, however, I was called by two people. Props to them both!

The first, called the day before the exam was to begin. She smartly asked to take it another time, because of her particular challenge. She said she “might be able to do it” but thought it was smarter to wait. I was absolutely willing and able to let her do that. Had she not called in advance, though, and waited till she’d received the exam to ask to take it later, it would have been too late, she would have had to push through it, and chances are, she wouldn’t have done well and would have been unhappy with her performance. And what if she’d done so poorly that she’d failed the exam?

The second called in the middle of the exam. She let me know she’d had to take someone to the ER, and although she thought she could return the exam on time, she wanted to let me know she might have a problem. I immediately let her know that if she got to the time she was to return the exam and wasn’t finished, she should call and I’d give her an extension on her time. As it turns out, she was able to finish, but I’m sure that knowing she could get an extension allowed her to relax into the process of taking the exam (as much as anyone can do that!), and her outcome will probably be all the better for her having alerted me.

I do realize that VAs do everything in their power to make things easier for clients, but one of the worst ways to do that is to under-communicate. If you find yourself thinking you “shouldn’t bother” a client with something, that’s probably exactly when you should. If anything,unless and until you find the perfect amount of communication, over-communicate with your clients.

They should know, in advance, of anything that could cause a problem for them (or for you, on their behalf). The time to tell them isn’t after something’s happened. It’s when you first think of it (and you know you think of things long before you get around to telling someone else—and that’s especially true if the news isn’t good!) If you get an inkling, start talking. That’s my motto. :)

People (a generalization) can handle almost anything, as long as they’re not blindsided. This week, create a standard around over-communicating, and communicating quickly. Talk about this in your interviews with potential clients, and refuse to work with any who indicate that your doing this would be bothersome. You want clients who want to hear from you about anything… whether it’s good, bad, or ugly.