Incentives Are Seductive Lies. Be Honest and Ask For the Business You Want

Valerie was having a challenge moving from the conversation to working with the client. She called to say that she’d read about a strategy on a community site for Virtual Assistants and was considering offering an incentive—two free hours of her time in the first month of the relationship. She shared that she thought if the client had the chance to try her out without any cost to him, he might then see how fabulous she is, and would continue in the relationship.

1. Not asking for the business.
ASK! If you’ve interviewed well and you feel great about the client and want to work with him or her, ask for the business. It’s the logical next step, and one the client is probably waiting for you to take. Consider saying something like, “You know, Jack, I’m really enjoying our conversation. I think we’re well suited on a number of levels, and there’s nothing you’ve talked about that I can’t handle for you. My sense is that we’d be a formidable team working together, and I’d love to work with you. How would you feel/what would you think about working with me?”

Remember, the answer is always “no,” until you ask the question.

Further, remember that while some clients (none I personally know, by the way) probably want VAs who don’t initiate and who aren’t proactive, the majority of them are too busy to work with someone who isn’t doing both. When you step into your space, own it, show a PC that you both know a thing or two about a thing or two and are able to step up and contribute with self-confidence, it’s far more attractive, and valuable. Hanging back will rarely ever serve you well, because it’s not living your truth. 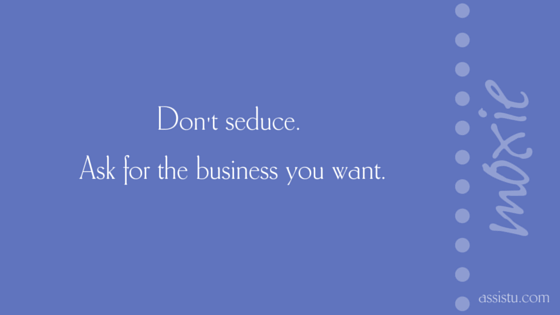 The bigger issue, though, is the message that service incentives send to those you’re trying to incentivize. If you were really good at what you do, you wouldn’t need to incentivize, would you? Your work would speak for itself, and people would be happy to work with you. As for me, when someone tries to incentivize me, I wonder what’s wrong with her, and move in the opposite direction as quickly as I can. I want to work with VAs who know their value, have high standards, and won’t try to seduce me into working with them.

And that’s the bottom line: incentives aren’t attractive, but seductive. By offering them, you’re trying to make it look as though you’re deeply relational and want to do something great for the client, but what’s really going on is that you’re scared, and trying anything you can to get clients to work with you. Just as a dog smells fear, clients sense what’s really going on with you, too. And when they do, even if they work with you, the dynamic of the relationship will never be one of two equals working together. You’ve tipped your hand. They know they real deal. All they ever have to do to keep you “in line” is vaguely threaten to take their business elsewhere.

Never incentivize. It will never bring you the clients you most want for yourself, and will create more challenges than solutions. Instead, be a fabulous Virtual Assistant. When you are, and you know your value, be sure you also know how to speak powerfully about what you do, who your ideal client is, and that you market to attract, not seduce.