I know you’re a fan of the retainer model. But my coach says what’s smarter is to bill at the end of the month, but require a minimum number of hours. That way you get the best of the retainer idea, without having to deal with overage hours. She also says I should do as much work as a client can give me (even if it’s more than I want to do, because it will make the client happy and the client will stay with me longer that way). What’s your take on that?

Great questions!  Today, let me tackle the idea of getting paid in arrears (at month end, after the work has been done), rather than in advance (retainer). I’ll do a follow-up post on the other question. 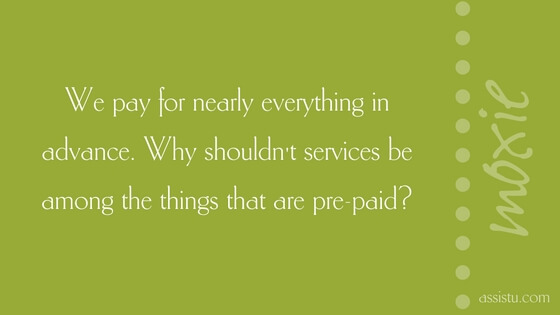 In my view, the difference is sanity vs. insanity. I’m here to help people have solid businesses that contribute to their having high-quality lives. And for me, that means running a “sane” business, where things are normalized and systematized, where you know what to expect, and where you’re not always having to jump to the beat of someone else’s drum.

Retainer helps you create that sanity. Billing at the end of the month doesn’t because it just can’t—there’s no way for you to know what’s coming, or what you should count on. Retainer also reduces drama, because it tells a client what you can give, and doesn’t leave her thinking she can get more whenever she needs it. Having a “minimum” doesn’t really say the same thing to a client, and, in fact, can let her think she can have as much of your time as she needs when she needs it.