What to Consider When Seduced by Possibility

We all want what we want.  And the more seductive something is, the more we sometimes want it. I’m convinced that there’s nothing more seductive in all the world than possibility; the mere thought that something could happen, even in the face of evidence that says it’s entirely unlikely, is enough to get entirely sane people behaving as if they’d lost their minds.

And so it often is, when it comes to clients, that the shiny matters most. I’ve seen people step over their own processes (to get the shiny, pretty clients), tolerate more than they usually would (for the shiny client whose shine is dulling), and stay far too long in relationships that don’t serve them (with the shiny client whose rust spots are eating them alive).

Hope for the possible tells us that maybe what we’re experiencing is not actually what’s happening. Or it’s not what will continue to happen if we just hang in there.

And, in truth, never, in a million years, would I want to tell anyone to give up hoping for the people she cares about. Hope is one of the most wonderful things we humans have going for us.

But this question of possibility, when applied to business, isn’t really about hope directed at the people we work with and care about, as much as hope directed toward the situations in which we find ourselves. And I’m telling you what, that’s a whole lot easier to deal with. 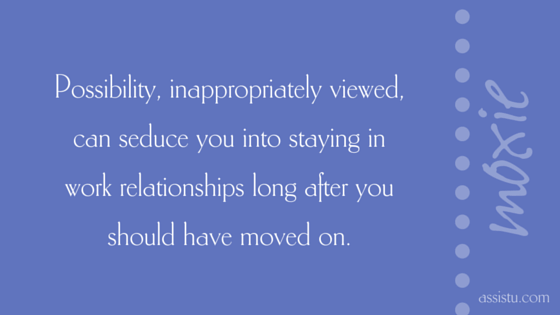 First, though, you have to separate out the care you feel about the people you work with from the work relationships themselves. Then you need to detach from your desire to be in those work relationships. As much as you may like the idea of working with someone, if the relationship isn’t working, the work won’t be good, and you really need to go. So detach.

In doing that, you can care about the people, hoping for the best for them, while being able to remove yourself from work relationships that no longer serve you, and that you can no longer serve.

In that way, with a client who started out looking all shiny and pretty and…

…you’ll be able to see what’s happening, and make a clear and quick decision about sticking around that’s based in the reality of what’s happening, vs. being based on the seduction of possibility, and the hopefulness you feel for the person and her situation (whatever that may be).

Don’t con yourself into thinking you can “save” someone–you can’t. You also will want to give up on the idea that you will  “convert” the unconvertible, or sway the rigid. You might be able to, but doing so will never be worth the cost in time and energy that you put out in order to make it happen. And don’t ever sacrifice yourself or the well-being of your business for what “might” happen with a client.

My mother used to say (inelegantly, to be sure, but I’ve never heard it communicated better), “You can’t make chicken salad out of chicken poop.” Remember that the next time you feel moved to hopefulness toward a client (or even a PC) and make sure that your investment is appropriate.