I was talking with someone about his relationship with his Virtual Assistant. He was saying how much he really wanted to give her a whole lot of his projects and processes and have her be 100% responsible for getting everything done or making sure it got done (including stuff that other people were handling, and including things he was responsible for getting done).

He went on to say that it doesn’t really happen that way and he wasn’t sure, exactly, why not.

I asked, “Have you given her authority over you and others so she can take whatever action she needs to when she’s not seeing forward movement as she manages all of this for you?”

“Not in so many words,” he answered.

“Do,” I countered. “Without it, you’ve really tied her hands behind her back. Set her free! Be as specific as you can about the authority you’re giving her to get it all done. Then see what happens.”

I’m telling you this story because you, as a VA, want to help clients. You want to take care of things for them. You want to make life easier on them. And sometimes, the best thing you can do is refuse to play the way the client wants to play. 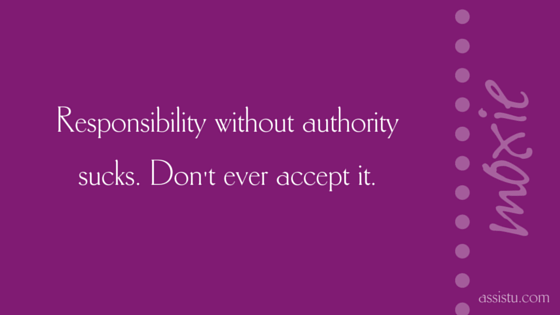 If you don’t know that you have the authority to take action when people (including your client—who may actually be the worst offender!) aren’t holding up their ends of the work needing to be done, refuse to manage/oversee that project; there’s no way it’s going to end well for anyone (and least of all, you).

Stephen Covey wrote about situations that are win/win (where both people win), win/lose (where one person loses because the other wins), and one many people don’t know (or maybe don’t remember), which is called “no game.” “No game” is called when you can see that you’re headed for win/lose and you don’t want to go there. When you refuse to play, you actually create a win/win, because there can be no loser. So think about the fact that refusing to accept responsibility without authority is actually going to create the best overall outcome for you and for your client, and it will be much easier to create it.