I haven’t charged it before but just got a new client with whom I feel it would be very appropriate. But I am not sure what’s the best way to do it – flat fee, or raising the hourly fee or something else, and what’s a reasonable percentage.

Oooo…unfortunately, I don’t actually have an answer to the question you posed because I don’t support VAs doing “rush” work.

You see, there’s a distinction between something occuring super infrequently, that’s important and couldn’t have been planned for (like the client’s been invited to be on Dr Oz in two days and the producers need X, Y, and Z from the client, who, in turn, really needs your help pulling those things together), and something that’s urgent and a “rush” because the client forgot, didn’t have an appropriate plan, or where she’s gotten a wild hair and wanted something to happen immediately (like deciding on Tuesday she wants to do a free webinar the next day and needs you to do all the work to make that happen).

Within a great relationship with an ideal client, just about any VA I know would bend over backwards to help a client with that first scenario—and wouldn’t imagine charging her extra (above, or in addition to, the usual fee) for it. I support that.

It’s the second scenario that spurs most people to think about adding some sort of “rush” fee, either to compensate for the rush, or as an attempt to make doing it less appealing to the client (because it will cost more to do it). And that’s the one I don’t support.

A couple of my reasons: 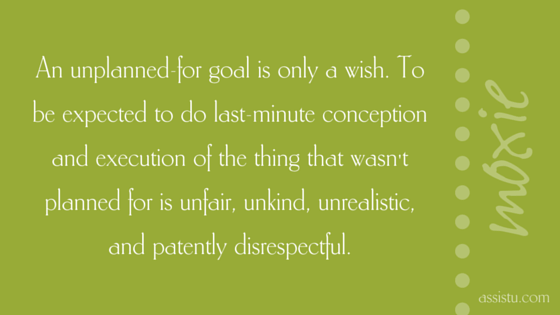 So, while I can’t tell you how to do it, what I will do is suggest what to do instead:

I hope that helps, Anastasia! Let me know your thoughts and if you have follow-up questions!

And I look forward to what the rest of you think about doing rush work and charging a premium for it!