I’m a fan of Dan Savage, a brilliant author and sex-advice columnist. He’s smart, and incredibly fun to read.

Late last week I was reminded of an old column of his that clearly impacted me (when I say old, I mean I must have read it three-or-more years ago, so remembering it means something).

In the column, a couple of men wrote in about a friend who was involved in a relationship with a younger, down-trodden, out-of work, no-money-in-the-bank kinda guy. Their pal had mortgaged his own house to rent the dude an apartment, furnish it, buy him clothes, and generally get him back on his feet. And once on his feet, the man dumped their friend for someone younger.

Even so, their pal didn’t date anyone else—he was holding on to the hope that his beloved would come back to him, and they’d live happily ever after.

The friends who had written to Dan about this wanted to know what they could do to help get their pal away from such a sad and unhealthy situation. Noble, that.

And Savage said they should talk to their pal and say something like, “He’s a user. You’re a fool.” 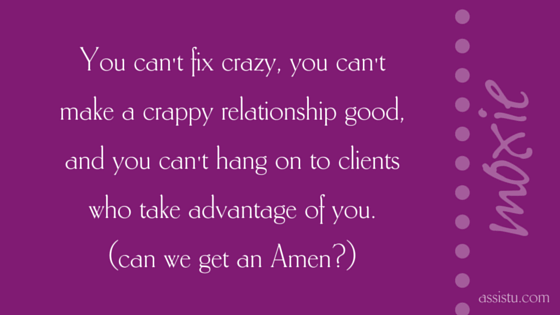 In her case, the client was struggling to pay an invoice, but assured the VA she would do so within two weeks, and asked the VA to please keep working with her as she prepared for her book launch—and, by the way, could the VA give her extra hours because the launch was so time intensive (the VA agreed to help)? Two weeks came and went, and the client didn’t pay the past-due invoice.

The VA, sure the payment would be coming and telling herself that it wouldn’t have been late (the second time) but for the craziness of the launch, didn’t say anything, and kept working on things the client sent her.

At the end of the month, the VA sent a new invoice—which included the past-due amount, the retainer for the upcoming month, plus the extra hours the client asked her to work. The client went crazy. She said she hadn’t authorized the VA to invoice her for “all that,” and thought the VA should give her a significant discount because the client had given her so much more work than usual. The VA was crushed by the response.

Later in the week, I spoke with another VA whose good nature was also taken advantage of. And today, still another. I’m starting to wonder if there’s something in the water ;) In case you, too, find yourself in an unpleasant situation with a client where you feel taken advantage of, here’s a reminder.

I’ve said before that you need to believe a person when she shows herself to you the first time. I’ve also said that you ought to resign as Mother of the Universe. In case those didn’t sink in enough, let me add a few others, like that you can’t fix another person’s crazy, you can’t make a crappy relationship good (my mama used to say you can’t make chicken salad outta chicken poop!), and you can’t (ok.. you can but what’s the point?) hang on to clients who take advantage of you. Hope you get it now. ♥

If you have one (or more) advantage takers in your practice, ditch ’em! (“He’s a user. You’re a fool.”) Get on with finding people who are ideal for you and wouldn’t think of taking advantage of you for a second—I promise they exist!

And make your standard higher about who a client has to be to get a place in your practice, to begin with—and who that client has to continue to be to earn the right to stay