Help Everyone Who Asks

Waaaay back in the day, I was Cheryl Richardson’s Virtual Assistant, she was the new president of ICF, and we were deeply engaged in working on the first-ever International Coach Federation conference.

Although instructions had been given to attendees about how to handle their own special dietary requests directly with the hotel, one woman decided she HAD to talk with me about it. And she went on and on about how she needed ME to handle it for her.

There was so much energy around it, and the woman was so yappy, that by the time I got off the phone after promising to let her know what we could do about it, I thought my head would explode. You know that feeling, right?

I was anything other than someone willing to help right then. And I called Cheryl to ask, given that the woman was a total PITA, for her ok to tell the woman she HAD to deal with it herself. What I really wanted, of course, was to do some virtual finger wagging and teach that woman a lesson by making her be responsible for handling her own stuff!

And C said, “Maybe it feels too big for her to handle on her own.”

My resolve to teach the woman a lesson softened considerably.

Then C said, “Call the hotel. Give them her request. Let her know you’ve handled it for her. Then send her some love, bless her, and send her on her way.”

My resolve was utterly gone, as was my resentment that this woman wanted me to do more than was my responsibility to do.

So I called the hotel, did the request, took a deep breath and sent her love as I dialed the number, and let the woman know that it was handled. To my amazement, she was no longer yappy. She was soft, and gracious, and beyond grateful. And I was genuinely happy that I had helped her. 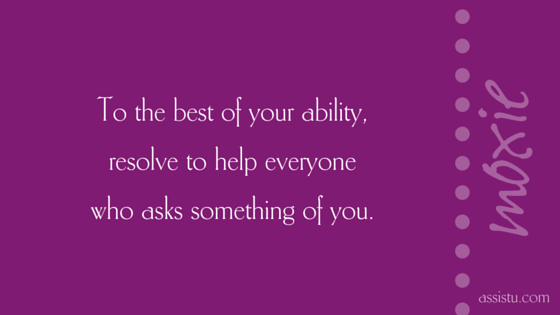 What this experience really taught me, and what I wanted to share with you today, is that it takes so very little to help people. Even those we think are crazy, or rude, or… yappy.

We never know what life experiences have brought them to be how and who they’re being right at that moment, and it costs us so little to be gracious, compassionate, and helpful. It’s the Golden Rule in action, to be sure. Just be aware of how you want to be treated when you’re having a tough time, and you’ll have a good clue as to how you might decide to treat someone who isn’t entirely at the top of his game when you encounter him. It’s also good to remember that when you help someone, especially when you don’t have to, it enhances who you are, and how you are in the world.

What impact can you have today by helping someone?