How to Explain Why Clients Need to Pay For Your Learning 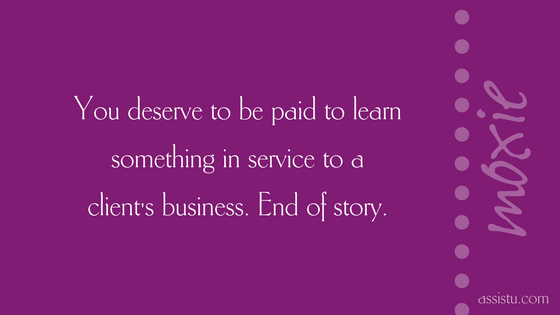 There’s a misconception in the world that says that a VA should come with everything she needs (tools, resources, education) to do the work she’s going to do. Have you heard it?

It’s a misconception because, as I’ve said on countless occasions, even if you learn 500 things every day, you will never know it all, or know how to do it all.

Within your business, my position is that if a client wants you to learn something in service to his work, he should pay for you to learn it, in terms of both the time to learn it and access to the thing itself.

You deserve to be paid for that. End of story.

And if you feel strong in that statement, maybe it’s the only thing you need to say when a client wants you to learn on your own time/dime. But if not, I have another idea for you.

Recently, Akila found herself in one of these conversations. The client had bought a program that she wanted to have implemented for her business. She said to Akila, “I want to offer you the program, to learn on your own time, so you can then implement it for me (and I’ll pay you for that) and offer it to your other clients. This is a terrific opportunity for you, the program is from a really influential marketer!”

Akila immediately realized that to implement this for her client, she’d have to learn it, and she was willing to. But the client was clearly wanting her to learn it on her time, AKA, “her own dime,” and Akila didn’t like the way that felt. After peeking at the program, Akila realized that, although it might be interesting to her client and appropriate for the client’s business, it wasn’t interesting to her or something she would want to share with other clients.

She asked me to help her create a crystal-clear standard about learning things for a client that would stipulate her expectation of being paid while learning.

Here’s what we came up with:

Because I cannot ever count on being able to use, in any way, what I learn at the request of a client, I bill for 100% of my learning time spent on a client’s behalf.

That pretty much nails it.  But I shared something else with Akila that she asked me to blog about because, for her, it was a huge AHA! and she thought it might be one for you, too.

Here’s what I wrote:

In other words, clients do pay for you to learn what they need/want you to know, but they don’t pay for things you’ve already learned. And it all works out in the end to a smaller investment than the client would need to make if you were an employee, only worked for her, and she had to pay you to learn both affiliate management and how to work with JVs.

Plus, if a client didn’t have you (or someone like you) to learn it and implement it, she’d have to take her own time to learn and implement it. In truth, paying you to do it is a wash, financially, or maybe even a better deal because you may be entirely more competent to deal with whatever is being learned.

This, indeed, is another benefit of working with you. Maybe it’s one that should be expressly conveyed, because I guarantee that your clients and prospective clients aren’t thinking about it.

Akila thought so. What do you think?