Does It Hurt When You Do That?

Jane and I were talking the other day to see if I might be an appropriate coach for her, which is why she was telling me about the immense unhappiness she felt in her relationship with a client.

Apparently, when you look up “micro manager” in the dictionary, said client’s face shows up next to the definition. And Jane, believing herself to be competent, was going out of her head with frustration because this woman wouldn’t leave her alone to do her work.

“What can I do about THAT?” Jane asked me.

Reminds me of the old joke:

Patient: Doctor, it hurts when I do that (poking his arm repeatedly to make the point).
Doctor: Then don’t do that!

The doctor and I see eye-to-eye on this, which is basically how I answered Jane: “Tell her to stop!” 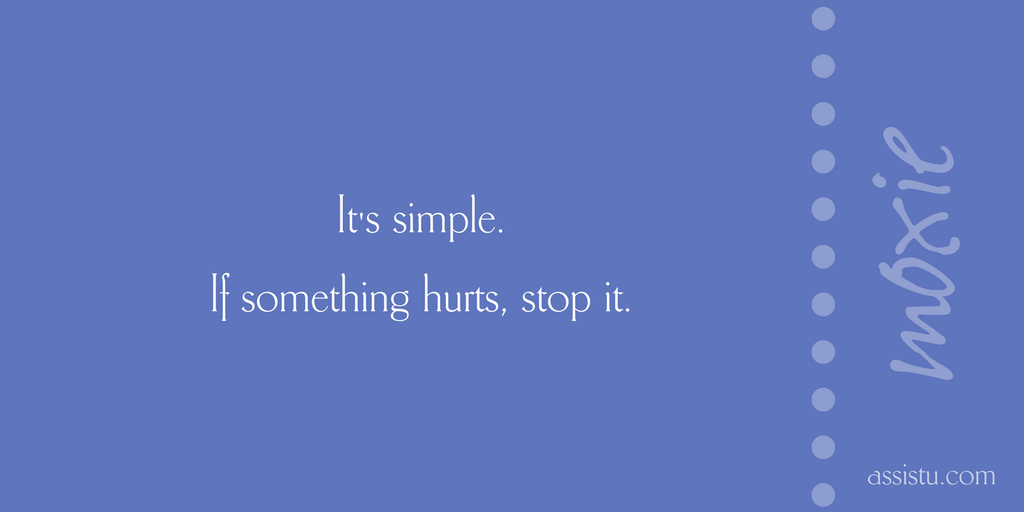 Look, whatever/whomever you experience that you don’t like, that frustrates you, that makes your days unhappy, that doesn’t allow you to do your best work, that challenges your standards, that doesn’t back down in the face of a boundary well applied, that makes you question ever starting your own business is only there because you allow it/him/her to exist in your world.

And making the pain stop is really as simple as… well, stopping. Stopping what you’re doing, and stopping what’s happening. The moment you make it all stop, the pain stops. I know it sounds simplistic, but that’s because it’s simple!

Stop–then do it differently. It’s a one/two punch of goodness. Stop the pain, then take a different action.

So if a client, like Jane’s, is plucking your last nerve, tell her so, and let her know that it will have to be different for you to continue to work together. If that’s not possible (for her to do it differently), then end the relationship and find a client who fits you better.

If you’ve set yourself up with a fee that you later discover doesn’t allow you to be profitable, change it and let all your clients know when it goes into effect for them.

If you’re constantly going back into your office in the evening “just to check email—‘in case’” although you’ve promised your family you won’t, stop doing it, and consciously focus even more on your beloveds.

There’s nothing in the world that you have to do (except pay taxes, as they say ). And no one on the planet in a business context that’s more important than you are, such that you should suffer even one little bit to be in relationship with him/her. So if something/someone is bothering you, stand in your power, stop it, then take a different action.

Landmark teaches a distinction between being “at cause,” and being “at effect.” If you want to learn it in depth, you might want to explore their training opportunities. For today, I’ll share from my own understanding.

As a practical matter, being at cause is about seeing yourself as the one driving the proverbial bus of your life, deciding where the bus will go, how it will get there, and taking 100% of the responsibility for whatever happens along the way. Being at effect is more like owning the bus, even maybe driving it, but taking no responsibility for what happens along the way, and, in fact, blaming others and circumstances for everything that happens (Running out of gas—not your fault; the navigator didn’t fill up the last time you stopped. Running into roadside bandits who made you pull over and stole all your jewelry—not your fault; the GPS told you to take that road instead of the way YOU wanted to go. Tire blow out–not your fault; stupid bus/cheap tires/grumblegrumble).

I think that far too many micro biz owners (including Jane!) spend considerable time at effect. But they don’t have to. All they have to do is resolve to do it differently, and then DO it differently.

The distance between at cause and at effect, in reality, is just one step. Picture that one step when it gets hard and you notice yourself feeling tossed about by something you’re not feeling in control of. Then, consciously take a step to the side, as if stepping from where you are, in the muck and mire of it all, to a new place—a place where you pull up your big girl panties, actually stand in your own power, call your own shots, and get on with what YOU want for your biz and life.

When you do, you’ll truly see that time’s too short to live it at the whim of someone else or tossed about with the tides when you have the absolute ability to do otherwise!