Do It! Rock the Boat!

This is an older story—one I use because I think it makes the point easy to understand.

Years ago, at lunch with a friend I hadn’t seen in quite some time, I ordered the Chicken Peppercorn Salad, but I wanted it with blue cheese dressing rather than the usual parmesan peppercorn. One of the things I loved most about this salad was that it was tossed in the kitchen, so it would be all yummy when it got to me and I didn’t have to deal with dressing on the side.

I was really looking forward to enjoying it! When our server returned to the table a few minutes after our ordering, our conversation went a little something like this:

She: With your salad, the dressing’s going to be on the side. Is that ok?

Me: No, it’s really not. Why can’t they toss it in the kitchen?

She: Because the bowl they use for tossing salads has the peppercorn dressing all over it from tossing the salads as they are usually made.

Me: It’s a professional kitchen. Please go back and ask them to find a different bowl in which to toss my salad.

She toddled off, and returned to say that the restaurant manager was going to take care of it. The restaurant manager had to get involved? Wow…sad kitchen, that. Actually, it’s also sad that the server didn’t use her head and advocate for me, instead, just dumping it back in my lap. More on that, later.

In the meantime, my friend grinned at me and said, “You’ve become something of a diva since the last time I saw you!” I looked at him askance and said, “No—I just believe that if I’m paying for something, it should be as I prefer it.”

It’s true. I do believe that, as long as what I’m asking for isn’t unreasonable.

If I had asked for her to provide me with a salad dressing they don’t offer, that would be an unreasonable expectation, and my having a tantrum over not getting it would be just… well…ick. But to ask, and expect to get, something that should be easily handled? That’s about seeing yourself as being as important as everyone else in the world, and having the moxie to expect to get what you want. 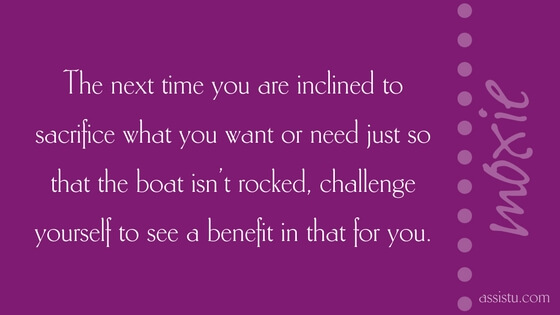 I’ve known many Virtual Assistants who are categorically unable to make very clear and strong requests—whether for themselves, or on behalf of their clients. And, from my perspective, it’s a skill that needs to be practiced and nailed.

Sure, sure, most of us have been taught to not rock the boat or make waves. But the next time you are inclined to sacrifice what you want or need just so that the boat isn’t rocked, ask yourself what the benefit of that is to you. I’ll bet you a Moxie magnet that you can’t come up with a truly valid benefit (and if you think you have one, just email me. If I agree with you, I’ll send you a magnet!).

So, if you know, for instance, that you would have said “ok” to the dressing on the side when what you really wanted was for it to be tossed for you, or you can quickly think of ways you would have given up on what you want instead of asking for it, you’re the perfect person to practice and build this skill.

Here are a couple of ways you can do that. Just pick one and try it out and see what happens. The more you practice, the easier it will get to ask for what you want.

Ask for something you’ve always wanted, but have never asked for because it’s “different.”

Whenever presented with something (usually this will be something you’re getting from a service provider) that isn’t what you ordered, isn’t the way you asked for it, or simply isn’t to your liking, say so, and ask again for what you want.

Is any of this too much? Some might think so. I think it’s exactly right. Take this example: I have a friend who HATES lemon but loves iced tea. When he orders, he always stresses the request for tea without lemon. If the server brings it, he points out her error to her and asks her to bring him a whole new glass of tea. Some would say, “Geez, don’t be a baby…just remove the lemon yourself!”

If he were being a baby, I’d still say he has the right to getting it the way he prefers it. BUT… My friend would say, “I so hate the taste of lemon that I don’t want even a lingering bit of it on the rim of my glass, or in the tea itself (in the case where the server actually drops the lemon into the glass).”

Given that, is it unreasonable for him to request a new glass? Nope! And the bottom line is this: You deserve to have what you want, within reason. Ask for it, and expect to get it.

So, what does all this have to do, really, with your VA practice and your standards? It’s simple: The better you are at requesting and getting what you want/need for yourself, the better you’ll be at doing that for your clients. They need that from you.

Go back to my original story about the salad I ordered, but this time, think of the job of the server—she is there to care for me and my interests as long as what I’m asking for isn’t unreasonable. That’s also what my VA should be doing.

If I’ve asked her to get something for me, and she puts in a request that she’s told cannot happen, I don’t want her coming back to me with a sob story about why they can’t give me what I want.

I want her to use her head, realize there’s really no reason why my request can’t be handled, and have enough backbone to try to get it to happen (assuming the request is reasonable). And if it genuinely can’t be done by the people she originally asked, I’d want her to come back to me with other options that give me what I want (a different vendor, perhaps).

The best way to do that for a client is to first learn to do it for yourself.