What to do When a Client’s Beliefs Break Your Heart

Although on sabbatical, I don’t exactly hide away from the world, and so when a friend reached out to me about an issue she was having with a client who revealed information that cut my friend to the quick, I made time to talk.

It quickly became apparent that I needed to write about her experience, even as I was hoping that her experience wasn’t going to become something that others would likely experience. Unfortunately, before I could carve out the time to write, another friend came to me with the same issue. So it’s happening. It’s a thing. And here I am, heart open and broken at the same time; none of us should have to deal with this.

Since both women came to me with nearly identical challenges, I’m fictionalizing them and morphing them into one person we’ll call Sally, while morphing their clients into one person we’ll call Mary. That’s the only fictionalizing I’ve done, and want to specifically let you know that the quote you’ll read from the client is exactly as it was relayed to me.

Although friendly with her clients, Sally had kept political conversation out of their relationships because she didn’t want to run the risk that differences in beliefs could create discomfort. But after the election, her client Mary, a life coach, brought it up on a call the two were having about Mary’s program launch. Mary was euphoric that Mr. Trump was our presumptive President-elect. And in her euphoria, she said that she would be incredibly happy when he “changes things for the better and makes it so that I never again have to work with those Muslim terrorists or homos who don’t understand real marriage.”

Sally was dumbstruck. She didn’t know what to do. She couldn’t believe Mary had said that, especially the WAY she’d said that. And two days later, after trying to process it on her own, she reached out to me.

“I can’t tell if I’m angry or hurt,” she told me. “What I know is that I don’t want to work with her anymore, but I don’t know how to get out of things since we’re in a launch. And now I’m wondering if I need to add a conversation during my initial call process to discuss political stances and where someone sits on a long list of humanistic topics?”

Great questions. Truly. It’s painful in the extreme, coming to terms with learning something you find untenable about someone you’ve cared about.

My heart aches for any person who has to come face-to-face with fear manifesting in hate in any situation or any context, and I’m beyond sorry it’s now knocking at the door of our own profession.

If there’s a silver lining here, it’s that out of all the places it might need to be dealt with, it’s easiest to deal with in a business context.

I say that, because in a business context, dealing with it means you need just four things:

In Sally’s case, she knew where she stood (hate speech, even derived from fear, wasn’t ok with her and she refused to be around people whose actions showed they to see the world in a polar-opposite way from how she does), and she knew the result she wanted (to end the relationship immediately). What she was missing was access to her inner owner, and, she thought, the ability to be even a little gracious to Mary.

So we talked about it—first the inner owner. I was able to show her that her concern for Mary’s launch came from the part of herself that was the technician doing the work and that the owner wanted what was best for the business and for her as the primary contact with Mary. The owner would see that the relationship has become toxic to Sally, and, as such, she couldn’t do the work anymore without it violating her in very real ways.

The owner would also see that since the business doesn’t have multiple workers, if Mary and Sally couldn’t work together, the relationship would need to end. 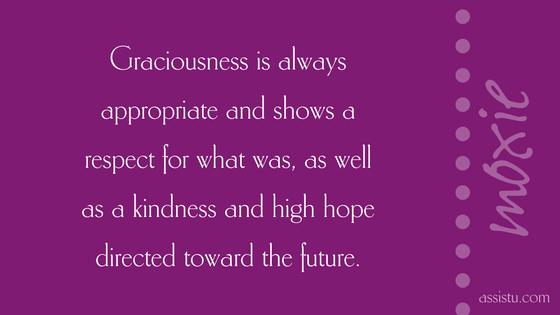 We worked on language Sally could use (in the owner’s voice) to let Mary know: “Although I never thought this would happen, the conversation we had the other day where you shared your beliefs about Muslims and those in same-sex marriages revealed a fundamental difference in how we see the world that’s so vast and unbridgeable that I’m no longer able to work with you, effective immediately.”

There were other incidentals added in, such as how she’d return part of Mary’s retainer for the month (something Sally wanted to do, and truly the right thing), a promise to immediately remove herself from shared workspaces, and this: “Given how divided our country is right now, as you search for someone to work with, I would suggest you reveal your position and beliefs upfront so that you can attract someone who is on the same page; fit at this level needs to be truly solid, and I’m incredibly sorry that, after all, it was something we did not have.”

And we worked on the graciousness piece until Sally could be genuine in adding: “Despite this turn of events, I’ve enjoyed the work we’ve done together, and wish you only good things, Mary. All the best on your launch!”

That took the most time. Sally, hurt or angry, was struggling to not let Mary have it. And from that place, it’s reaaaaaaaaaaaaaaaally hard to find an ounce of graciousness. The path I took her down was two-pronged.

First, I invited her to share out loud what she most wanted to say from her own place of hurt. I think that unless you get that out of you, you can never really move beyond it. So letting it out is a very good thing. It addresses the pain, and the grief of the loss one feels and creates space for action that’s not actually seething with emotion below the surface.

Once we did that, I invited her to turn her attention to gratitude. It’s super-hard to stay hurt and angry (or resentful) or lapse back into it when actively grateful. I had Sally tell me all the good things from her relationship with Mary that she felt grateful about. When she finished, I asked her to close her eyes and tell me what she most wished for Mary’s business. What she included is what came out of her mouth in our conversation, and that’s what made its way to Mary.

Graciousness is always appropriate, and if in a relationship like the one these two shared (that had been very good and connected for some time before it was broken), it shows a respect for what was, as well as a kindness and high hope directed toward the future. It cannot ever hurt, and in some cases, will help soften a message the other isn’t expecting.

As the relationship was toxic to Sally, I suggested that this news be delivered to Mary via email. When someone is toxic to you, and a conversation would put you in a position to be further injured or traumatized, email is the most appropriate delivery method of anything you need to say because it keeps a distance between you and the other. For the record, it’s the ONLY time I would actually endorse delivering news that will alter a relationship via email. We teach this in our program, and I believe in it wholeheartedly.

Sally sent the email to Mary, took the actions she promised to take, and received a one word reply: “Ok.”

On the whole, that’s the kind of win I was hoping for, and I know that Sally felt relief that nothing more was said.

On the back end of this, I asked Sally to not rush away from her feelings about any of it and to make notes about what she feels and what this challenge has taught her. Only in getting the lessons can she take actions that are appropriate (neither too light or two stringent) to update standards for her business and to hone her ideal client profile, and her client consultation and intake processes.

While the tendency would be to lock things down tight and try to cover every possible different belief and value you hold before agreeing to work with someone, I’m not sure that that doesn’t create more of the very thing (fear and hate) that Sally saw in Mary’s words. In times like these, I think the answer is to be more open and loving, toward ourselves and others, while maintaining healthy boundaries. I teach that part of the process should be to explore values, because, as said before, fit is so very important, and we can see how painful it is when a relationship unexpectedly derails. But perhaps a simple way to do it is to explain how you feel about diversity and ask the client to do the same. The openness of that conversation, I think, has to allow you both to get to the heart of what matters, without being pedantic about it.

It’s painful to run into something that lets you know you’re in the wrong place. I don’t think it’s less painful to get to it before you get into the relationship because what hurts your heart, hurts. Know what I mean? But I absolutely know that it’s easier to get out before you get in, than to have to do what Mary just found herself having to do.

Your turn. Have you run into any similar issues with clients since the election? If so, what else do you suggest a VA do?