Attraction. If you’re an AssistU-trained VA, it’s a concept (or, as TJL would say, an “operating system”) you’ve heard a lot about. Others of you reading this probably also know about Attraction—it’s difficult to move about the ‘net anymore without running into it.

Recently, I’ve run into some VA web sites where the VAs are trying to employ some sort of Attraction mojo, but they aren’t really getting it. Instead, what they’re doing is being seductive and manipulative under the guise of trying to attract clients.

Sally Jo (not her real name) writes about all her skills. One of the skills she lists is SEO. In reality, Sally Jo has never done any SEO work. She’s read a book about it, and has purchased a self-study course that she’s not even opened yet. But because she feels that she could get up to speed swiftly and deftly if she needed to, she goes ahead and lists that on her site as a skill she possesses. Sally Jo has noticed that a lot of clients seem to want help with SEO, and she knows it will be attractive to them seeing it listed on her site.

The problem is—the client sees that and expects that Sally Jo can do SEO work at a proficient level now, not later. When the time comes that Sally Jo can’t perform the way the client thought she could, things are likely to get pretty uncomfortable for the two of them, as the client feels manipulated and betrayed. 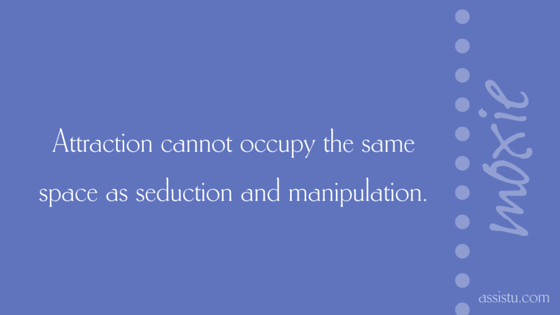 Lying is never attractive, is always seductive and manipulative, and will never lead to anything truly good. Telling the truth, and all of it, is always attractive. It can also be a bit scary—I get that. Still, it’s absolutely worth doing.

So how can Sally Jo tell the truth and actually be attractive? If she feels drawn to list skills on her site, she could have two lists—one of skills she actually possesses, and one of skills she’s actively working to develop.

As you look at your standards, and you look at what you’re trying to do to attract clients, raise the bar for yourself. Tell the whole truth, all the time. Clients you get through lies won’t be the ones you really want, anyway.