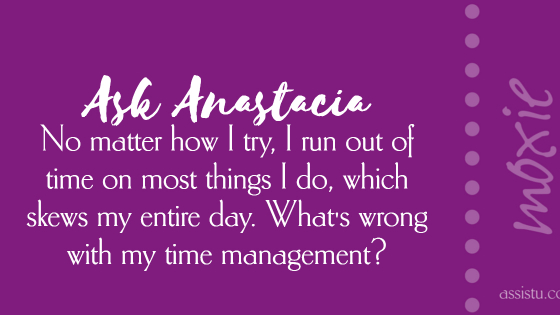 Jessamae did an on-the-spot session with me to try to figure out why her system of time management wasn’t working for her.

“No matter how I try, I almost always run out of time on most things I do, which skews my entire day. I’ve even tried using the amount of time (from my time tracker) that it took me last time I did the same thing and adding a few minutes, but I still run out of time. What’s odd is that I’m never off by much, but I can’t seem to figure out how to adjust for that so I can plan my day perfectly. I feel defeated.”

Turns out, what Jessamae was missing was an accounting for two things:

1. The micromovements associated with her work.
2. Her thought time.

Micromovements are the little things we all do, but never really consider. For instance, if you’re needing to create a doc in Word, a micromovement would be opening Word. Another would be starting a new doc. And, if you had just been away from your desk, others would be sitting down, and putting your hands on your keyboard. Even the instant that you being to think about turning your attention to that task is a micromovement.

And while micromovements exist inside the tasks we do, as well, those tend to get bundled into the time we track. So, it’s the micromovements at the beginning that are most often missed, as well as sometimes the ones as we bring the task to a close (so don’t stop your time tracker until you’re entirely done!).

And it makes sense that Jessamae would have been off by just a little; micromovements don’t tend to take a lot of time, but they were taking her just enough that it was throwing her off.
I asked her to start her timer the second she turned her attention to a task, rather than when she was actually beginning the task. A week later, she reported back that things were so much better and her days were far less skewed.

I shared something else from her; our brain doesn’t know that our actions are tiny. It just knows you’re moving forward in creation and in getting things done. And once you start moving forward, you build momentum that then carries you even further. It’s a really good reason to just start something, rather than sitting and doing nothing (assuming you want to be productive, that is!).

Fixing the issue around her thinking time took some work. First she had to realize that thinking on behalf of the client is billable time. But then she had to realize that it’s hard to pin down how long appropriate thinking takes, because it’s never really the same, twice. I urged her to pad each block of time associated with a task by 10 minutes to start. The idea would be to start her time tracker, settle into thinking, and then move into micromovements, the task, etc.

When she checked back in with me, she had realized that 10 minutes was too much for some things, and noted the time it actually took so that she could do it differently for those things next time.
We discussed the possibility of her keeping the 10 minute buffer for everything to create some spaciousness in her day. The active braining we do as VAs takes a lot out of us, and spaciousness between tasks can help with mental overload and overwhelm.

Whether Jessamae keeps it or finds it works best for her to be more precise and tight in her time management, I know she’s off to a really good start around kicking the feelings of defeat to the curb.

Your turn: how do you make sure that your time management gives you the time you actually need to get things done?