Agreements: Protecting the Stuff That Dreams are Made of 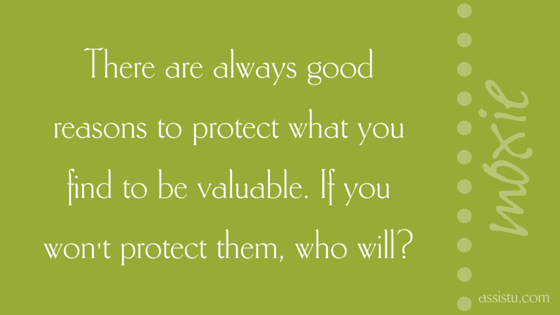 I’ve been asked what I think a virtual assistant should do if a new client wanted her to sign a confidentiality agreement about his intellectual property. The VA was disinclined to do it because she 1) thought the client should trust her, and 2) because this particular confidentiality agreement spelled out, very specifically, an exorbitant amount of money she’d be responsible for paying him if she spilled the proverbial beans. Her question was whether this was customary, and what she should do from there. Here’s my reply to that question:

As a VA, I worked with high-profile clients who never asked me to sign non-disclosure or non-compete agreements–and they really should have. I don’t believe that their not having me do it was because they were open and trusting. I believe it was because they didn’t necessarily know better at the time, and, possibly because they didn’t think I was a threat to them (meaning that even though I had all their “stuff,” I didn’t have what it took to use it and make money with it because it wasn’t my own field of expertise). They weren’t fearful, but they were pretty stupid on all counts; they had something super valuable to protect, and they didn’t protect it. That’s short-sighted, and it’s risky.

And I think that’s the key to consider when presented with a client who wants to have you sign an agreement…what, exactly, is at stake? The more important, or valuable something is, the more likely someone is to want to protect it, because the more likely it is that someone, somewhere, will want to rip it off, or potentially rip it off unintentionally (the more you’re exposed to, and the more you assimilate into your life, the less you tend to remember where you read or learned it in the first place–which can lead to your sharing ideas as your own that really aren’t).

So, having said that, when I created the intellectual property for AssistU, I had a contract drawn up that was to be signed to those I threw wide the doors for. My contract is non-negotiable. If someone wants to work with me, she signs. If she doesn’t want to, or doesn’t feel able, that’s ok with me—but we won’t be working together. Simple.

Am I fear-based? I don’t think so; I think I’m protective of the stuff I own that I view as being highly valuable. You can bet that I don’t sit around worrying, gnashing my teeth, or spending hours and hours looking around the Internet to see who’s ripping me off. But you can also bet that when I find someone who’s doing just that, I get into action about it.

Sure, there are professional thieves in the world. Some of them are even going around stealing IP. I think, though, that most of the people who engage in copyright infringement and theft of IP are people who are genuinely ignorant of the laws about such things. Copyright law isn’t easy to understand, and I think most people must have been absent on that day in elementary school when they taught about not plagiarizing or stealing someone else’s work—because so many people do it.

So, your client, having something he views as valuable, wants you to sign an agreement to protect that. It doesn’t matter that you believe yourself to be trustworthy, nor does it matter that, as an AssistU VA, you’ve signed an ethics pledge and run your practice in accordance with it. What matters is that the client feels the need to protect his stuff, and does not know you enough to know whether you’re trustworthy, and might even want the agreement signed even if s/he did know, you know? It would be the smart business decision.

In a situation like this, remember that it’s not at all about you. Nor is it about whether you can be trusted. It’s about protecting the “stuff.” It’s also about protecting a dream. If you have anything of value that you protect with insurance (a home, jewelry, a car, your life), you should understand this. This agreement is a sort of insurance for your client.

But here comes the part that is about you. Your clients contract was absolutely written to protect him, and put you 100% on the line for whatever happens. His attorney’s job is to protect him, not make things fair. So the big dollar figure it stipulates? That’s there because his attorney did his job.

I could go on about why you should have your own NDA that you present, but that’s a post for another day. What I’ll say about this situation is that you need to have your attorney review this. Actually, you need to have your attorney review anything and everything (I meant that, quite literally) you’re considering signing. What you think something says, and what it really says could be vastly different and you could find yourself in a pickle that a few hundred bucks could have prevented. Make it a standard.

And make this a standard, too: If you don’t have the funds to have an attorney review agreements, just say no to opportunities where someone requires you to sign something.

It’s far better to walk away than find yourself bound to something you wouldn’t have wanted to be bound to if you’d known better. High standards here are the key; standards that protect you.